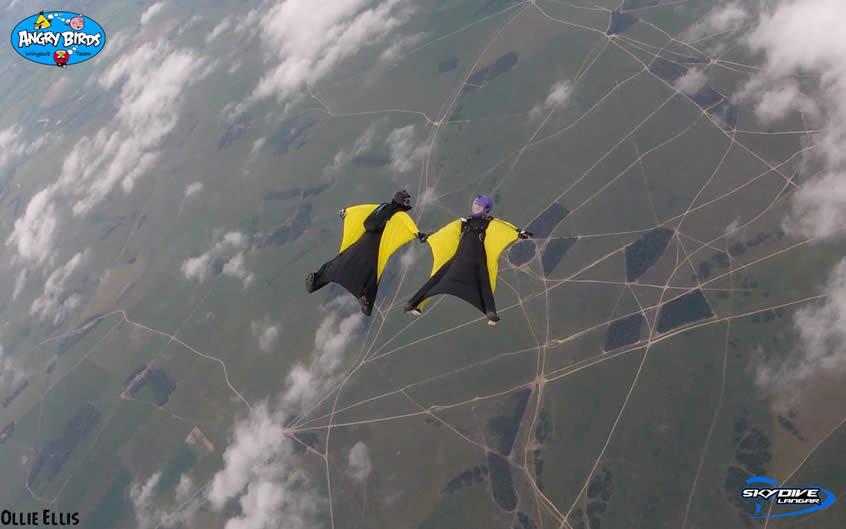 May Bank Holiday weekend saw the UK Wingsuit Performance and Acrobatic Nationals take place at Skydive Netheravon, and Langar was proudly represented by the ‘Angry Birds’ Wingsuit Team. With the Nationals being so early in the season it was difficult to find suitable weather weekends to train, especially with one of the team, Ellie, studying abroad. However we were incredibly lucky to be blessed with a perfect week of weather right before the competition, which led to a last minute intensive training camp! Skydive Langar was great at helping get us in the sky as much as possible.

We didn’t enter the Nationals expecting to win, seeing as it was our first competition as a team, but that didn’t stop us trying! The current British Acrobatic Champions, Tutti Frutti, have posted some great scores over the past few years. Our main goals were to compete to a reasonable standard and to finish in the top two positions in the Advanced category in order to qualify for the World Championships in 2018. This being our first Nationals and first competition as a team posed quite a few challenges, such as choreographing free routines and timing them to a particular altitude window as well as getting used to unfamiliar aircraft run-ins. As we had very little time to practice everything, let alone perfect it, a lot of the competition for us was done on trial and error with the hope of performing as best as we could.

The competition normally comprises of seven rounds, with 4 compulsory rounds and 3 free rounds. The compulsories are scored in flying style, number of complete sequences and camerawork. The free rounds differ slightly, again scored in flying style and camera work but with no set sequence to follow, the flow and creativity of our dive plan is also scored. Cloudy conditions meant that the competition didn’t get jumping until the afternoon of the Saturday, but we had some extra time to dirt dive. Nerves were high as we went up for our first round, but luckily this was one of the free rounds which we had practiced and supposedly knew what we should be doing! The next two rounds were compulsory rounds which posed more of a challenge mentally but actually were not too bad to complete.

One of the main challenges for all the jumps came from the competition flight plan: For both the Performance and Acro competitions the plane flies a crosswind run in, upwind of the dropzone by distances from around 1.5 miles and greater to suit the wind conditions. Competitors exit, turn 90 degrees left and then in theory fly in a straight line back to the DZ. Despite this being fairly simple in theory a combination of never practicing a straight flight back along with an unfamiliar DZ and competition tunnel vision meant we had a few too many navigation issues. This was a problem we had not anticipated having never had them in practice, so it was a steep learning curve and did affect our performance on the later jumps. Despite this, we were pleased to get through 6 out of the 7 rounds reasonably well given we had only completed around 34 training jumps as a team.

A joint decision was made to drop the 7th round late Sunday afternoon as the weather had closed in, and did not look to be improving.In the end we were very pleased with our performance all things considered. We had achieved what we set out to do and ambitiously competed in the Advanced category to qualify for the 2018 World Championships. The Team have high aspirations for the next year, as we hope to develop our flying skills and push the boundaries of Acrobatic Wingsuit Flying. Hopefully one day we might even win Gold too!

‘Angry Birds’ is Ellie Marshall, Jonathan Charles and Ollie Ellis. Get in touch if you want to join in with the growing wingsuiting community at Skydive Langar! Coaching and organising is happening throughout the season.