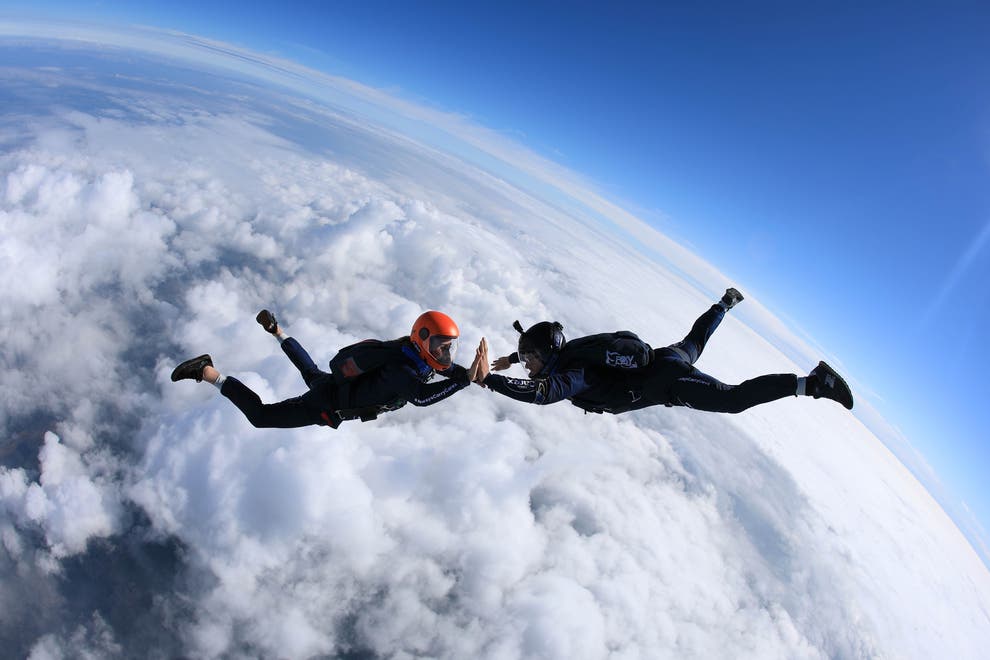 The media are calling them “daredevils”, but we know them as Josh and Emily… the Guiness World Record holders for the most high and low fives done in one skydive!

Let’s face it, for those of us who know them, it should come as no surprise that skydive instructors Emily and Josh are great at high fiving. But now they are officially the best in the world at doing it both quickly and precisely – with Guiness requiring them to complete full hand contact and to alternate between high and low fives to show their accuracy.

The World Record jump took place at Skydive Langar and was presided over by a representative from Guiness World Records who confirmed the jump was a success, with 32 high and low fives achieved over a 63.3 second freefall.

The whole thing was filmed by our very own Gary Wainwright (Swoop), whose footage was used to prove the attempt’s success.

It’s not uncommon for brands to engage with skydivers as a means of promoting their product through the world’s coolest sport, and in this case, the jump was supported by Carex and used to celebrate “Freedom Day” – the day on which the majority of Covid based regulations were lifted in England.

Speaking of her new record holder status, Emily told members of the press:

“The attempt was a lot more challenging than we had initially thought but we persevered and are so elated to have achieved this Guinness World Records title in partnership with Carex.”

The pair were “fully sanitised” when attempting the record, according to Carex, which is encouraging the public to carry hand sanitiser at all times.

This isn’t the first time Langar’s exceptional staff have been seen in the mainstream media. New film “Black Widow” includes a skydiving scene featuring one of our instructors, as does Kingsmen and a number of other Hollywood movies, plus adverts including the 2008 live Honda ad and promotions for Sky and more.

Skydive Langar is proud to be a centre of excellence in skydiving and our drop zone is open 364 days a year (every day but Christmas Day) offering the opportunity to try skydiving through a tandem skydive, learn to skydive through AFF or enjoy skydiving with us as an experienced jumper – check out our upcoming events on our Facebook page for more.