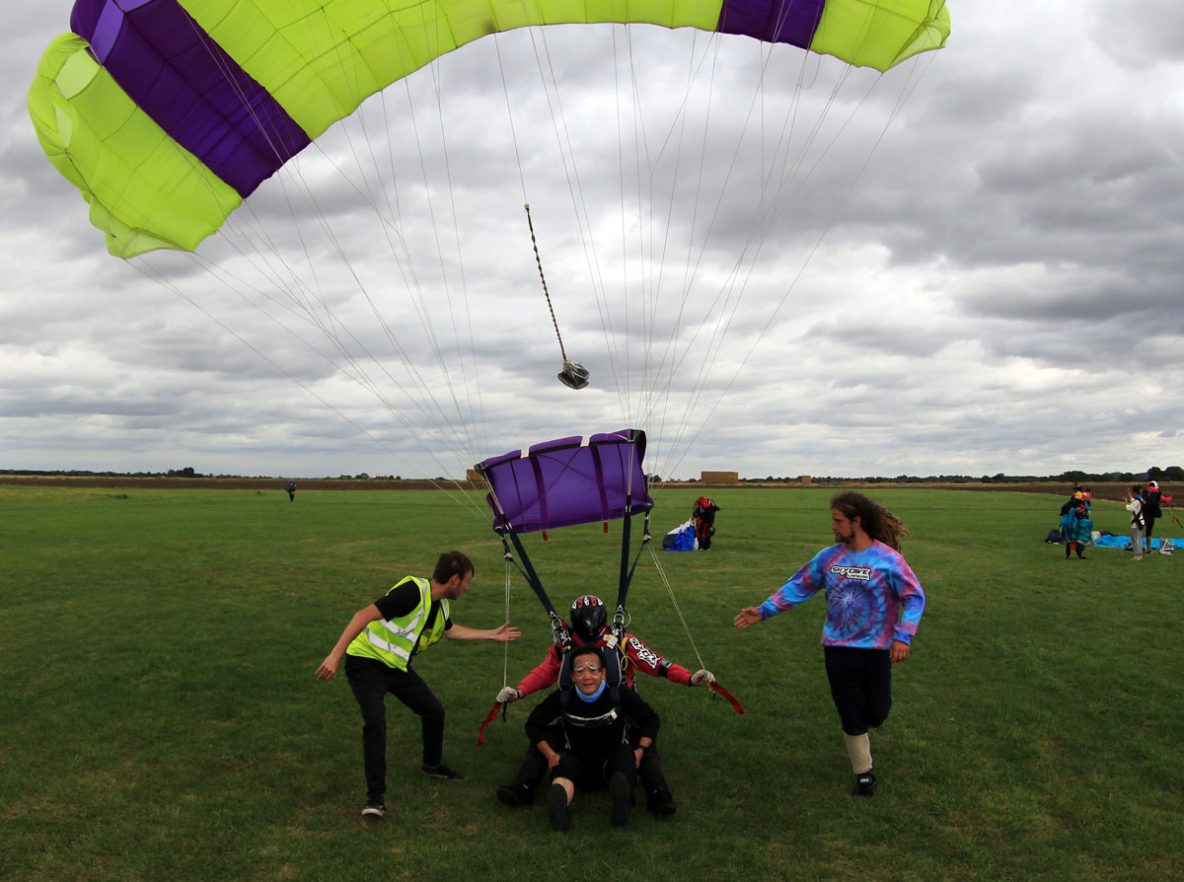 In mid to high winds a 300-400 sqft Tandem Canopy will act like a sail and drag the Tandem Student and Instructor. For the instructor this can be difficult to stop whilst attached to the student. It’s very useful to have “catchers” assistants who help collapse the canopy after landing.

We’re always happy for anyone to help with this. It’s a great way to help out your dropzone. Just make sure you let DZ control know you’re going out to help and ask for an experienced catcher to help you if you’re new to it.

The aim is to wait until the tandem pair have landed safely then symmetrically stall the canopy. The catchers do this by taking the toggles from the instructor after landing and pulling them to apply 2-3m of input past the toggle ring. In reality, this all happens quickly and smoothly as the tandem pair land.

Stalling the canopy symmetrically means both toggles need to be pulled. Pulling only one can turn the canopy and worsen the sail effect.

To pull both toggles we use 2 catchers. Before the tandem pair land clearly communicate whose going for which side both verbally and by standing on your side.

Avoid standing directly in front of the tandem pair, they have limited ability to change flight path at this height and may hit you if you get in the way.

As the pair touch down, take hold of the steering lines above the toggle. Many tandem canopies will have two steering lines, hold them both.

Modern Vectran steering lines can cause friction burns when pulled through a closed fist so it’s recommended to wear gloves when catching tandems.

After landing pull the line about 2-3m through the keeper ring until the canopy collapses. “After landing” is important, don’t apply any inputs whilst the tandem pair are still above the ground.

Avoid pulling the toggle just a little bit to the flare position. This makes the canopy more efficient and you might get dragged too! If you manage to get hold of the steering lines but can’t manage to pull them for any reason, don’t let go, just plant yourself on the ground, the tandem pair will slide backwards and the catch will happen automagically.

After the Landing you can help the instructor out by pulling the line back through. To do this, follow the line back to the riser, then pull the line above the ring until the toggles sit back on the riser. Keep an eye on the canopy as you do this to make sure it’s not reinflating.

As all this is going on the camera people are trying to get the shots they need. Avoid being two loud and definitely avoid swearing on the landing area as you could end up in someone’s Tandem Video! Give the cameraman space to get in for the interview afterwards, they can’t talk or move their head much whilst filming so keep an eye on them to see what they need.

Stay vigilant. There are other canopies coming in and lots of movement. Keep an eye on the sky and try to know how many more canopies are left to land.