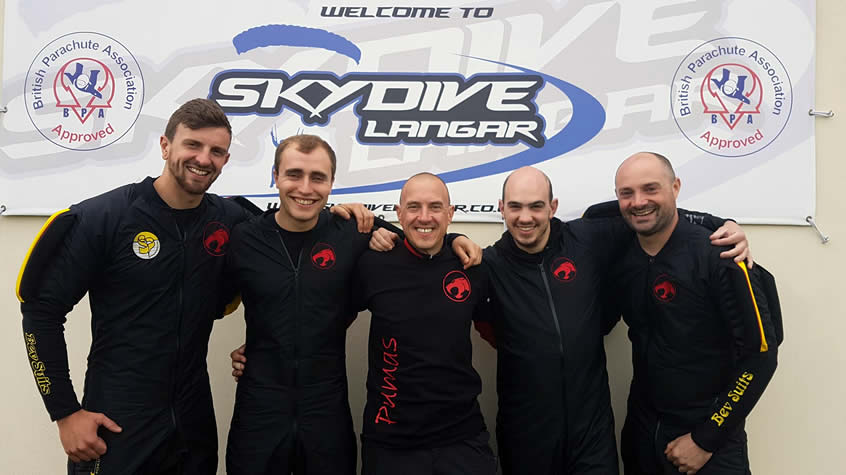 Just over a year ago Matt, Sam, Jamie and Paul met at Langar bar, with an average of 50 jumps each, chucked their names in an anagram generator for inspiration and Pajama Pumas 4way Skydiving Team was born! After choosing some slots and spending some confused time looking at the draw of formations for the next day, we were ready to go. With bucket loads of enthusiasm, we funnelled 4 and a half (?) exits, made loads of 2 and 3ways and in the final round finally scored our first point! We were delighted with our 1 point across 6 rounds and 0.17 average score in the Rookie category. There was something nice about our score matching 4mula’s average of 17 (which won the top ‘AAA’ category).

Pajama Pumas’ infamous 1 point in 6 rounds proved that you can have loads of fun competing in 4way, no matter what your ability level is. If you’ve got your FS1, it’s definitely worth throwing a team together and having a shot! Being a Langar based team meant there was loads of opportunity for great coaching. Kate Lindsley (from team 4mula at the time) picked up the Pumas and started coaching us. By the next competition at Netheravon we’d increased our score to a 1 point average and by UKSL 3 our momentum had carried us up to a 5 point average! By Nationals in August we scored a 6 point average and managed a mid-table finish.

With different amounts of commitment to training, it’s easy for 4way teams to fall apart. Pajama Pumas managed to stay together, however, with Matt and Sam topping up team training with extra tunnel fun with half of another Langar team – Blue Steel (James Parry and Paul Willcock). Still under Kate’s coaching, she suggested we have a go at ESL (European Skydiving League) with this line up. We did Single A as by this point we’d done about 5 hours of tunnel and learnt the blocks. And hey – swapping Jamie for James and Paul for Paul meant the “Pajama Pumas” name still worked! We scored an 11 point average at Saar Louis, a beautiful dropzone in Germany, which was enough to win the gold medal and be crowned European Single A champions!

After a brilliant first year of 4way, Pajama Pumas picked up Paul Colman as James left the team to focus on freeflying. After training hard in the tunnel over winter and managing to get a few jumps in in Spring we headed to UKSL 1 of 2017 down at Dunkeswell. Despite tough competition from teams Vantage and Dive Hard we managed to win our first gold medal in AA to kick start the season! UKSL at Dunkeswell was brilliant fun – plenty of Langar jumpers took part and won medals with a particularly exciting competition in Single A where the all-girl Langar team “Boobasaurus Rex” won silver in a jump off!

Pajama Pumas have had amazing support from Langar staff, instructors, camera fliers, packers, tunnel friends, the barman(!), all the fun jumpers and coaches at Langar. We’ve been inspired by many Langar teams including (but not limited to) Chimera, 4mula, Tyranno4us Rex, 4loceraptor, Tricerablox, Blue Steel and 4Tune.

4way skydiving competitions come with an amazing atmosphere: it’s all about having fun, jumping with friends and the buzz of a good competition! Pajama Pumas will be representing Langar in AA this season.

If you’ve got your FS1 and want to give 4way a go, give us a shout and we’ll help you arrange a team! Not sure what the rules are? Need some guidance on exits or how to make the formations? We’ll be available at all the UKSL competitions this season to help out!

See you in the bar for some dirt diving and beers!