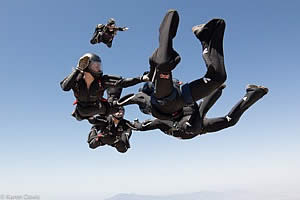 Former World Champion Joey Jones, player-coach extraordinaire, continues with the team for the fourth season, helping deliver British National silver medals in 2015 and 2016. With over 25 years in the sport, he’s seen it all – both coaching top international teams and flying in them. During his time with DeLand Majik, he bagged no fewer than 5 world medals! Can he take 4mula to the top?

Inside centre Dave Rodgers was one of the founding members of the team, and has been there for the whole journey from rookie team to AAA medallists. After getting an AFF level 1 as a birthday present from his wife, he’s never looked back! Dave represented the UK with 4mula at the 2015 European Championships and the World Cup, and is hoping to complete the set by qualifying for next year’s World Meet.

Ady King joins the team for 2017, flying Tail. Previously flying with Vision99, he competed over the palm in Dubai at the World Air Games in 2015. Skydiving has become a passion for Ady, and he now has both Category System and AFF instructor ratings. He brings over 3,500 jumps in experience, and the team will be hoping this helps push them to the gold!

Pete ‘Taf’ Mather has also joined the team from Vision99, who were a close 3rd place behind 4mula in the 2016 Nationals. Can the combined forces of both teams make it to the number 1 spot? Watch this space! Taf flies point and with over 2,500 jumps has recently gained his AFF instructor rating. One of his goals is to be a part of the first UK 4 way team to win a medal at a World Meet.

The 2017 lineup closes out with Nick Robinson on camera. This is Nick’s 3rd year with the team, and he’ll be hoping this year’s training will see him sunning himself in Australia at that 2018 World Meet! Nick is one of Skydive Langar’s full time staff, has over 3000 jumps and holds tandem and Category System instructor ratings as well as being on the camera team.

4mula team members will be around Langar all season, both training and coaching, with regular free FS coaching weekends. Keep an eye on the calendar and come along to make the most of free coaching from one of the top UK teams.