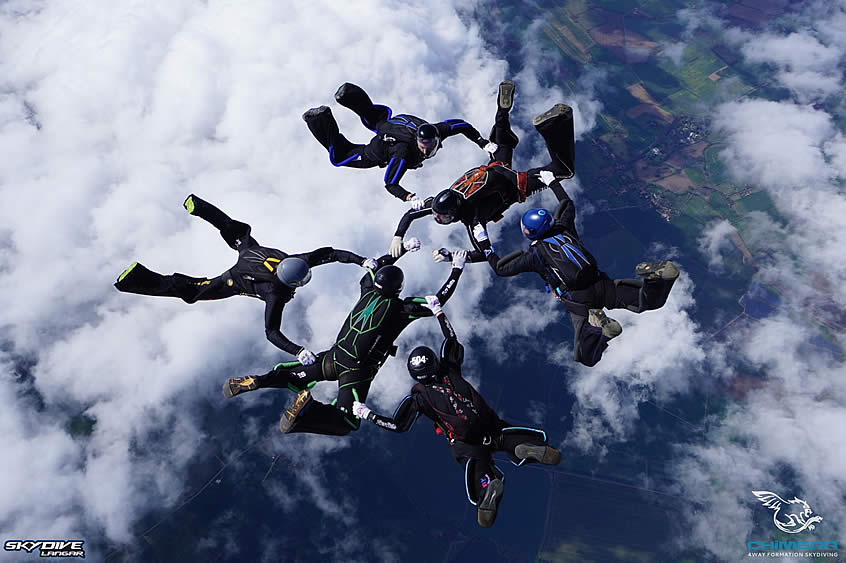 Six way is hugely underrated. That’s what we think anyway.

Bridging the gap between the speed of 4 way and the precision of 8 way, it’s an awesome discipline for FS jumpers at all levels. So when Skydive Langar approached us to organise the event, we jumped at the chance to run a 6 way competition! We had the dive pool (thank you to Milko) and plenty of passion for FS around the drop zone. The first (hopefully of many) Chimera organised 6 way comps went ahead last weekend – and was a huge success by all accounts.

The event got off to something of a rocky start, with dodgy weather on the Saturday keeping us grounded, but Sunday was a gorgeous day! Our four teams arrived bright and early to make the most of it, and we even had time to round off the day with a beautiful sunset 12 way, organised by Taf. The medals, trophy and prizes from Square One and Bev Suits were all given away at our prize-giving ceremony.

Six way FS isn’t new to Langar. We’ve hosted a few 6 way comps here before; we can happily launch a six way, with camera, from our two Grand Caravans and we can fit 2 teams in per lift, meaning it’s a fast-paced competition too. There are some more advanced manoeuvres, but many of them reflect 4 way blocks, making them easily relatable for 4 way jumpers.

That means it’s a great event for all levels too. The four teams at this year’s competition included a team led by Phil Curtis, which comprised members of 4Mula, Volition and NFTO (all very successful 4 way teams). They, not surprisingly, put on a great performance and walked away with the trophy. But we also had much less experienced flyers, who managed to put in awesome performances too and some brilliant efforts from people who had far fewer jumps and competitions under their belts.

The rules of the competition also aimed to level the playing field. 40 seconds of working time was started 5 seconds after the exit, or when the first point was built (whichever came first), taking the pressure off the exit launch.

The weekend wasn’t all about skydiving though. In true Langar fashion, we put on a cracking party in the bar on Saturday night! The Chimera bar quiz, including ‘guess the skydiver’, ‘guess the drop zone’, intro and films rounds, went down a treat, with 30+ people sticking around for it and Team Pete taking the prize of a bottle of Jagermeister and £40 bar credit – thanks to the David Gagno for the donation!

All in all, we had a great weekend with lots of fun skydiving, lots of fun in the bar and lot of new visitors to the DZ too. The plan is for Chimera to organise more events later in the year, plus we’ll be around FS coaching and load organising too. With events planned for every weekend of the season, it’s going to be a great year! See you on the flight line…