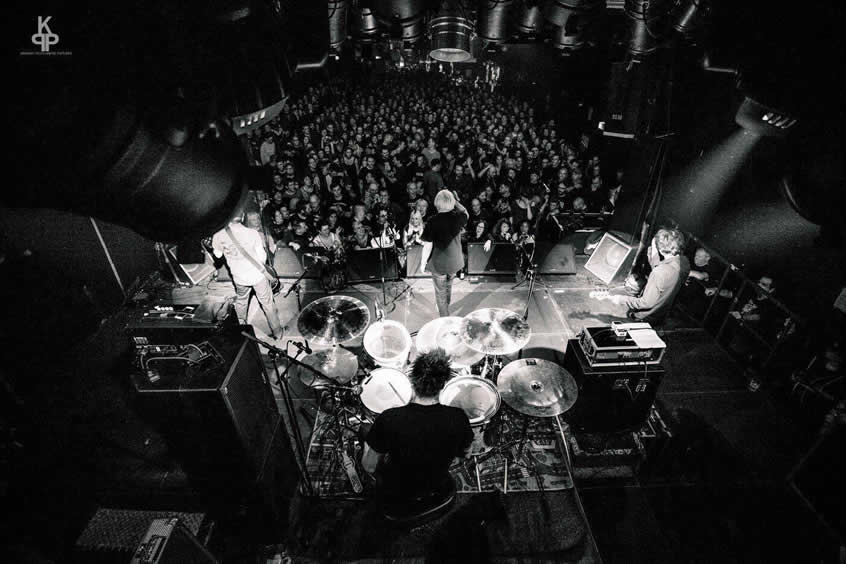 Jamie Oliver (no, not that one) is the drummer for long-standing punk band U.K. Subs. He’s a regular face around Skydive Langar after completing his AFF course with us in 2016. Here he is talking to us about what made him take the leap…

Custard Creams or Bourbons?
I’m going to have to go with custard creams. The only bourbon I like comes in a glass!

I know the U.K. Subs have a relentless touring schedule, so where are you currently?
Yeah our tour is 32 shows in 5 weeks so it’s been pretty hectic. Tonight we are in Bologna, Italia so I’m looking forward to eating some a-pizza-an-a-pasta. It’s a real shame though because one of the other bands I sometimes drum for, SNFU, are touring almost the same route as us and we’re just missing each other by a day or so and tonight they play just 45 minutes drive from us, and I can’t go to see them. Annoying!

Have you been jumping much/in the tunnel on tour?
Much to my annoyance, on this tour the drop zones we’ve been close to on our days off have been closed due to crappy weather, but I did jump out in Canada when we toured there in September. I got my A licence and then hit Parachutisme Atmosphair in Quebec City and Skydive Niagara, flying over the Falls on the way up. That was fun. I haven’t had ample opportunity to get much tunnel time in but I did do half an hour with Rosina Kasickova in Prague which was a lot of fun. I didn’t smash into the wall this time too, which was a bonus.

What are you up to now with your skydiving?
Well I’m up to 65 jumps now having been to the Skydive Algarve Christmas boogie. My goals were to get FS1 and my B licence and I smashed out FS1 with Linley Ewing in the first couple of days there and we did 14 points in my qualifying jump, which I was really happy about. Then I was on a weather hold for 5 days straight so I went to Skydive Spain to get up to the 50 jumps needed for my B licence, having already done everything else for CH2 and JM1. And now I’m learning to fly head up for FF1.

The age old question, why did you get into skydiving? Don’t rockstars have it all?
Firstly, I’m no rockstar! I’m just a drummer in a band. But it’s interesting because I never cared for the actual sport side of skydiving at first. Since I travel so much, I just wanted to be able to see the world from another perspective and not looking through a window on a plane. But after qualifying AFF I started to get bored of doing solo belly jumps and so, naturally, I wanted to progress, and with each new skill ‘unlocked’ I got more and more excited. So I’ve inadvertently fallen in love with skydiving in a much broader sense than I initially intended and actually, it feels great to be at the absolute bottom of the ladder and just loving it. No pressure, immense fun. I haven’t felt this way since I started playing music. Another aspect to it is that I wanted to cut down on the amount of booze I consume and in my naivety I thought skydivers must always be sober. They won’t be drinking a lot each night, I thought. Little did I know…

Have you got a favourite jump so far? Anything that really sticks in your mind?
There’s a few actually. My first sunset jump was incredible. On the way up, the sun was just about resting on the horizon and everyone in the plane knew we were in for an epic jump. I chilled out all the way down and took in the vibrant orange hues dominating the Québécian landscape. By the time I was under canopy the sun was far enough past the horizon that I could look at it directly for a few seconds at a time. I did my checks and turned into the wind which happened to be coming from the direction of the sun, and watched it disappear, leaving behind a bright crescent moon lingering in the dimming sky. I think that was the jump that encapsulated everything I wanted from learning to skydive. Other favourites include my first hop n’ pop, the first time I did a horny gorilla and my first FS jump after getting FS1 which was just carnage. It went tits up but it was fun as hell!

So when you aren’t playing music or jumping out of planes, you take some pretty cool photos. Do you think you’ll combine any of these passions someday?
Honestly, who knows? If I do, it’s more likely to be for fun than a professional endeavour. I often wonder if being a tandem cameraman might be something I get into a little further down the road, but for now I’m just enjoying the ride.

What’s better? Playing to a sell out crowd or freefall?
They’re both awesome! But they’re both awesome in completely different ways. What makes touring exciting for me is that you never know what you’re going to get; every day is completely different and almost anything can happen. We’ve played on the back of a truck as part of an anti-fascist rally, driving through Italy towards a mob of neo-nazis wanting to do us some damage. We’ve flown with a mad old pilot who took us through a huge storm in a tiny plane to get us to our gig in the arctic circle after the airline told us all flights were grounded due to bad weather. We’ve been tear gassed offstage by the police during the San Bernardino riots in California. It all makes for extremely exciting times, but skydiving offers a more disciplined and goal-oriented form of chaos. I don’t think you can compare the two.

So you’ve got an event at Langar, what’s the deal?
Yes, I’ve convinced ten of my friends (including my mum) from the Crew bar in Nuneaton, to come to Langar on March 2nd to do a tandem skydive They’ll be raising money for Zöe’s Place Baby Hospice who provide palliative, respite and end-of-life services to babies and infants under the age of five. I visited the hospice recently and I can tell you that the experience of seeing these kids who won’t even survive their infancy is just brutal. It’s kind of inspiring in a way though, because kids when they’re sick, they don’t pity themselves like adults do. But yeah, we’re pulling together to try to raise as much money as possible to help improve their living conditions and quality of life and also support their families who are going through the unimaginable. If anybody wants to get involved they can email me at jamieuksubs@icloud.com or donate at www.justgiving.com/thecrewbarskydivers. We’re also hosting a charity gig featuring Jim Jones and the Righteous Mind and a bunch of other bands on February 25th at the Crew and Queens Hall in Nuneaton. Tickets are available from http://www.seetickets.com/event/zoefest-ft-jim-jon…

Where can we come and see you play?
Our tour schedule is listed at www.uksubs.co.uk but coming up we have the East coast of the USA, UK tour, South America, then we hit the European festival season, Australia, New Zealand and then back to the UK for Christmas. There’s talk of doing Japan in amongst all of that too but nothing is confirmed yet. But to anyone coming to see us, make sure to come and say hello and talk about skydiving with me. I’ll be at the bar!

Any other projects?
Actually I’m so glad you asked because there are two worth mentioning and this is a kind of call to action to anyone who wants to get involved. The first project I’m working on, with a couple of app developers I met in Portugal, is a skydiving app called SkyBull that sends you service bulletins by push notification. The idea is that you download the app, select the equipment you use from a drop down menu and enter some other information, and whenever there’s a service bulletin for the gear you use you’ll be notified immediately. It’ll also allow you to schedule reminders for your reserve repacks and things like that and will include X-ray docs and government documents so you don’t have to google stuff every time you travel with your rig. We are in the process of contacting product manufacturers to request that they add us to their service bulletin mailing list. They can also contact us at info@skybullapp.org. The other project I’m working on is a skydiving video, which I’m collecting footage for. I’m looking for big way footage, night jumps, freeflying, tracking, beach and sunset jumps, anything epic really. So if anyone has something they’d like to submit, please get in touch at jamieuksubs@icloud.com.

Finally, what is your favourite track of all time?
Ahhhh, well there are too many to mention. Current and all-time favourites include ‘Staring at the rude boys’ by the Ruts, ‘Riff Raff’ by AC/DC, ‘Bloodtørst’ by Kvelertak, ‘Don’t be a geek, you freak’ by Sick on the bus, ‘Smash it up’ by the Damned, ‘Head smashed in Buffalo Jump’ and ‘Fate’ by SNFU. The list goes on. And on….