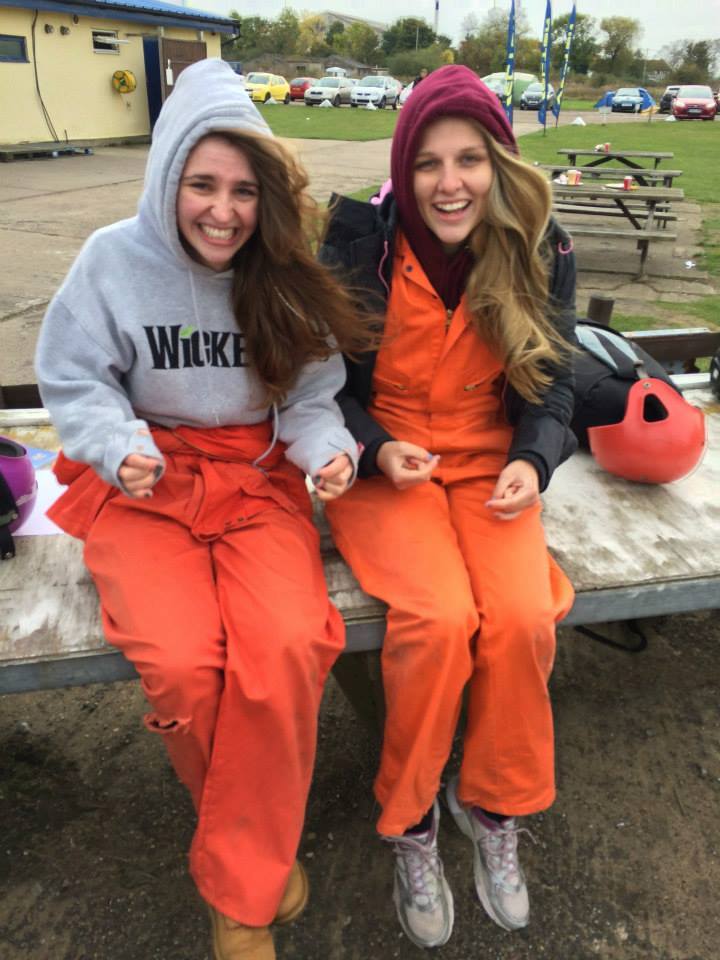 Starting university comes with its fair share of challenges. Like for example, learning how to cook (finally) or figuring out how the washing machine works. But for some of us, these challenges just aren’t enough. So we learn how to do something even better – skydiving anyone?

I started skydiving in my first year at university. Like most students, I decided to do the Static Line course because, let’s be honest, even with a lovely student loan there was no way my bank could handle the sudden pain of buying an AFF course. With my name down for a ground school and the deposit paid, I eagerly awaited my first jump.

Arriving at Langar for the first time was… underwhelming! It was October, the sky was grey and it was very, very cold. That’s the bad part about skydiving as a student; you start just as the season ends and the ground starts to freeze. We were hurried into the upstairs classroom (thankfully with the heaters blasting) and began the ground school. It was daunting to say the least. Sat for hours on end being taught malfunctions is an easy way of realising that last week’s panic about getting the essay in on time is sort of insignificant. But it didn’t scare me. In fact, I was excited to get in the air. I’d never done a tandem before so I suppose ignorance is bliss as to the nerves that would (and did) come once I was on the plane for the first time.

I wish I could say that my first jump went perfectly; that I arched stunningly out of the plane; completed my landing pattern without a word from DZ control through my radio; and had the softest landing. But in no way did that actually happen. I flopped out of the door, no doubt with the look of terror on my face. My arch was non-existent, again probably down to general fear. I would have likely landed in Grantham if DZ control hadn’t been talking to me the entire way down.

So to be honest, my skydiving career had a very bad start, but being a student, I was learning with lots of others who were in the same boat as me. We were all bad. I mean sure, there’s always that one student who sails through all the levels, but that was certainly not me. Knowing that everyone was once as bad as I was (I had a few words of encouragement from the instructors) it didn’t put me off returning to Langar the next weekend to jump again.

I am lucky in that I go to university in Nottingham. Not only does that mean I get subsidised tickets from the SU, but it also means that whenever the weather is good (and I have no classes worth going to) I can get to the dropzone easily. And when I started, I did. Too much, if I’m honest. I could never figure out the weather and more times than not my trips to Langar did not include a jump. But I did learn a lot on those days, and I realised that it’s the people that make skydiving as amazing as it is and not just the jumping. I remember being in awe of the coaches. For me, the president of the club with his 200 (or thereabouts) jumps was an amazing skydiver, so talking to coaches who were national champions with thousands of jumps certainly put things into perspective.

I qualified in March despite the weather being relatively good for the season. For a student, skydiving becomes a constant battle – whether to buy the next jump ticket or have a few (many) drinks with fellow students. Being in first year, spending the weekend at Langar meant losing out on precious time with my uni friends who I thought I needed to stay alive in the cut-throat world known as freshers. Yet the more I skydived, the more I realised that I had more in common with the people I met at the dropzone than university. Skydiving was worth not going out every Wednesday to the student night at Rock City, it was worth turning down invites to bar crawls every Friday night, because every time I wanted to spend money, I compared the price to a jump ticket, and the thought of buying another ticket always won.

Ultimately, that’s what it is to be a student skydiver. Your friends who don’t jump frustrate you when they don’t get excited that you got 13 points on a 4-way that day. You become distanced from your course mates when you ditch the lectures and seminars because the sky is far too blue to stay on campus. But most of all, you get used to the angry calls from your parents demanding to know why you’ve asked for more money again only to throw it away on “jumping out of a plane that is working perfectly fine”. But at the end of the day, my degree is just a piece of paper (I study English, just to put that into perspective) whereas skydiving is something more. Since joining the University of Nottingham Skydiving Club, not only have I learnt so much, but I’ve also met the most incredible people. Now that I’m Vice-President of the club, it’s my job to sign up new members. All I can say to them is forget the debt and the nerves and the parents: it’s bloody worth it.

Skydive Langar hosts several university skydiving clubs, including Nottingham, Birmingham, Loughborough, Leeds, Warwick, Stafford and DMU. If your university doesn’t have a club, why not set one up? Give us a call and we can put you in touch with people who have done exactly that, and can help you through the process.