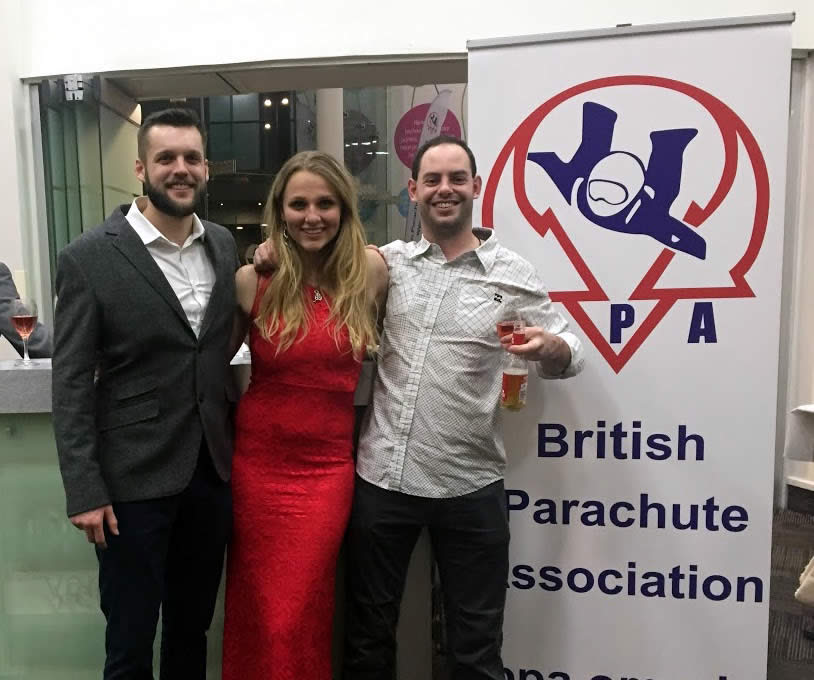 The ‘Angry Birds Wingsuit Team’ is an acrobatic wingsuit team, consisting of Jonathan Charles and Ellie Marshall as performers and Ollie Ellis as the camera flyer. The team was founded in late 2016, with combined aims of wanting to push the boundaries of acrobatic wingsuit flying, to encourage participation in wingsuiting and to hopefully win a couple of medals along the way!

JC has a history of extreme sports and found skydiving in June 2012. After camping out at Skydive Langar for a week and successfully completing an AFF course he was hooked. Spare time was quickly stolen from other sports to make way for the new skydiving passion. He completed his wingsuit training just a year after making his first jump and became one of the few ‘regular’ novice wingsuiters at Langar in 2013. Now in 2017 Jc is an established wingsuit coach and load organiser with 500+ wingsuit jumps. He competed in the 1st FAI Wingsuit Performance Flying World Cup in 2015 at Netheravon and the controversial 1st FAI Wingsuit Performance Flying World Championship in 2016 at Z-Hills, Florida. Performance flying has now taken a backseat to the Angry Birds Wingsuit Team! When not team training he can be found coaching and organising as well as looking after the team’s kit and working hard as a basic rigger towards his full parachute riggers rating.

Ellie is a relatively new skydiver, having only achieved her A licence in 2015. She had wanted to skydive her whole life, and finally seized the opportunity when she joined the University of Nottingham Skydive Club! She quickly fell in love with the sport and built up strong formation skydiving skills before she started wingsuiting in 2016. She now has nearly 350 jumps including over 100 wingsuit jumps. Ellie has high hopes for the Angry Birds Wingsuit Team in the coming years and is looking forward to developing her flying skills and seeing just how good she can be! When not skydiving, she is a student of languages at the University of Nottingham, and currently spends her time studying between Spain and England.

Ollie has been skydiving for 5 years over which time he’s developed from novice parachutist to proficient freeflyer. Over the past few years he found his passion moving more to flying wingsuits and has recently put a lot of effort into growing his skills within the discipline. With a history of air sports under his belt including paramotoring and speed flying he has a good technical understanding of all things aerodynamic. He is the team’s camera flyer which poses new challenges not only to his flying skills but also with the technical aspects the camera work brings. Ollie is always ready to keep meeting new challenges head on as the team evolves, taking on more complex and difficult manoeuvres whilst getting the shots in the air and at the bar!

JC and Ollie will be around Skydive Langar regularly this season coaching and organising wingsuit events. If you’re looking for coaching, get in touch!